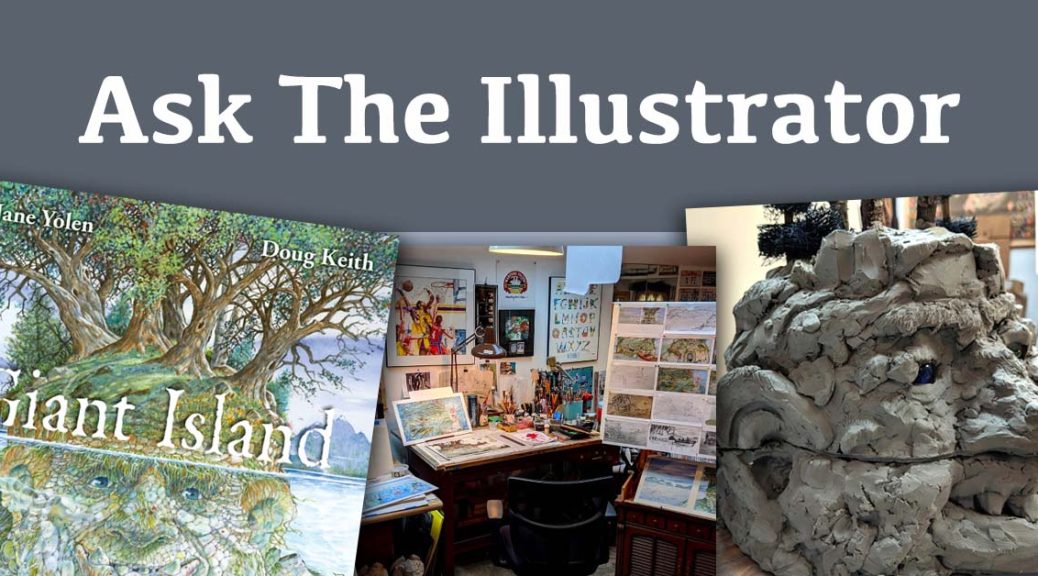 Doug Keith is the illustrator behind the mythical picture book, ‘Giant Island‘. A fantastical adventure story, written by author Jane Yolen and published by Flashlight Press, where two children, their dog and their grandfather boat out to an island for a day of fishing and exploring.

When they step off the motorboat and onto the craggy shoreline of Giant Island they see that the island is, in fact, quite small. Little do they know, it holds a secret larger than life.

I had a chance to ask Doug Keith some questions about his artwork for this picture book and his inspiration for the illustrations.

Q: Tell me about your illustration style? How would you describe it?

A: “I work in traditional mediums perhaps best described as “old school”, cause I’m old!! For Giant Island I used gouache and colored pencil.”

Q: What challenges did you face when creating the illustrations for ‘Giant Island’?

A: I had some pretty dramatic viewpoints for parts of the story so drawing them was challenging! To help me, I sculpted a rough clay model of “Giant Island”  to use as reference.

Q: What gave you the idea to draw faces or giants in rock?

A: “I relocated from the east coast years ago for a job in Seattle and was immediately mesmerized by the beautiful landscapes. On one of my first ferry boat rides I clearly imagined the islands and mountains were sleeping giants! I started doing sketches which lead to a series of postcards, one of which Shari, my editor had in her office!“

Q: Did the illustrations come before the story? How did you and Jane Yolen work together for this project?

A: “Giant Island started out as a wordless picture book and I had most of the artwork already completed. However, the publisher felt it needed words so Shari, my editor reached out to Jane. Once Jane reviewed the art and added her text, it was agreed some additional art was needed so I did a few new illustrations.“

Q: Tell me a little about the location of Giant Island. Is it based on a place you’ve been to?

A: “As mentioned earlier, the Pacific Northwest is blessed with amazing landscapes, however there is one particular place, I believe it’s called Hat Island that may have been my inspiration!“

Q: What do you hope readers feel or think when they see the illustrations in ‘Giant Island’?

A: “I hope it will inspire their own imagination that all is not as it appears!!“

Q: What’s next for you as an illustrator? Any projects on the horizon?

A: “No picture book projects at the moment. I do clay sculpting for a garden statuary company that recently commissioned a new piece for their collection… a gargoyle!! “

‘Giant Island’ is available now for pre-order through Amazon or Bookshop.org ahead of its release on August 1, 2022.

This post contains affiliate links. I may earn a small commission if you choose to make a purchase.